I found myself with a little bit of time this morning and I thought I’d share a bit of my latest tinkering.

Those of you that have followed this blog for a while may remember my first post where I talked about pointing a CUBE through an ASA out to my ITSP, Flowroute. That post is located here for your reading pleasure.

While the software/hardware has changed with my setup the idea is basically the same. I still have a CUCM system (now 11.x) running with a phone (I’ve felt like being different lately so currently I’m using a retro 7985G as my endpoint (G in this case does not mean Gigabit)). I also have a firewall, a Cisco 5506-X (it was time for an upgrade from the 5505) and I do still have a CUBE. My previous CUBE was a 3825 and it worked wonderfully but the 3825 has long since outlived its relevance in today’s enterprise environments. In my stack of possibilities I also have a 2921 and while it is still a very powerful and valid router, it just seems too easy.

To that end, my replacement CUBE is virtual. Yes, I said virtual. If you follow Cisco and their products, you may already know about the Cloud Services Router, the CSR1000V. The CSR1000V is a virtual router that runs on a VMWare ESXi host. It runs IOS XE though there is some Linux/Unix on the backend that makes it tick. 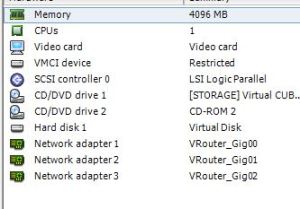 A few important things to note…

If you look at the configuration snippet above, you’ll see that in the voice service configuration there is a trusted IP Address list. That list contains the IPs of my ITSP and my CUCM. If I remove those IPs from the list, calls fail. If you are linking your CUBE or gateway to multiple CUCMs or other systems you’ll want to have those IPs in that list as well. What this list does is let the good/known IPs in to complete transactions/calls on the gateway/CUBE and keeps the unknown/bad IPs out to prevent them from placing calls on the system. IP addresses that are part of dial peers will be added to the list automatically but will not show up in the configuration.  If you’ve ever set up an IP PBX on internet, you know that Toll Fraud is a real and serious threat. If you don’t want or need this feature you can turn it off by entering “no ip address trusted authenticate” in your voice service configuration. This is not a recommended configuration but in your environment the TFP mechanisms may do more harm than good.

Thanks for reading, I hope this has been informative.